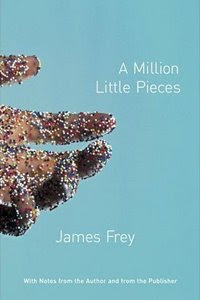 fiction or non-fiction, controversy or not, this book is fantastic. really powerful, stream of consciousness style, very descriptive without a bit of poetry to it. just brutal off the cuff honesty. depressing and hopeful. i had no idea what i was getting into and thought it would be something like William S. Boroughs' 'Junky' as the book's front jacket incorrectly states.

there is a part where he has two caps, a cavity and two root canals done, strapped to the chair, no anesthetic, no drugs. the description of pain so excruciating that he 'whites out' as opposed to blacking out is horrifingly vivid. he clenches tennis balls in each hand so hard in reaction that it breaks his fingernails.

there's another section in the book where he harshly criticizes television and film directors and producers for getting drug addiction wrong every single time. he talks about forcing a director to actually go through what addicts go though and see if they'd even make it out alive, yet alone how it would change their point of view, approach and aesthetic in the portrayal on screen.

that seems to be the case with a few other things... addiction, disease, famine, genocide and war. some things are just too real.
Posted by daniel at 4:27 PM